Showing posts from March, 2010
Show all

Which components should install developer to enabled BizTalk Project in Visual Studio? 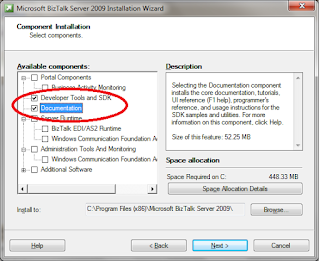 March 27, 2010
BizTalk Server 2009 R2, which has not been released yet, will be known as "BizTalk Server 2010" when it rolls out sometime later this year, Microsoft announced. BizTalk Server essentially functions as a messaging component in service-oriented architectures. It's used by enterprises to help tie disparate business processes together. The new BizTalk Server 2010 name will have the effect of shifting the product's lifecycle support forward, according to John Breakwell, a Microsoft product support services team member. The shift will occur because the product is no longer associated with the current R1 and R2 nomenclature and product support timeline. Source
Post a Comment
Read more

Scenario: I have a Message which should be sent to confirmation after confirmation it occurs in a folder but the type of the message is changed Solution: so schema of the sent message is and after confirmation the schema will be So we are unable to correlate Field1PK with Field3PK if we use promotion with default settings While promoting Field3PK set its name to Field1PK like Download solution sample
Post a Comment
Read more

Orchestration Debug with System.Diagnostics.Debug and Parallel shapes in orchestration 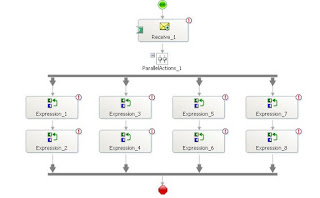 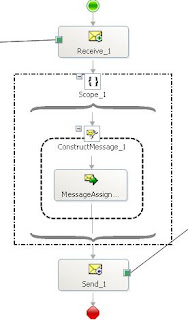 You can debug your orchestration using Visual Studio by attaching it to BTSNTSvc.exe processes. The orchestration will be debugged without break point if it has Exception, in this case you will not need to setup a break point, like any desktop application which you run in debug mode. The engine will generate C# file for you were you can details of the exception. In this post I want to show how to debug an orchestration setting a break point I will create an orchestration which will throw an exception when dividing by 0 (Zero) Create a simple schema where you will pass 2 numbers and another schema with 1 parameter which will hold division result. All element should be decimal and distinguished 1. Create Receive port in orchestration 2. Create Scope 3. Add Construct message to Scope 4. Add Message assignment to constructor 5. Create Send port Edit expression for assignment: Variable_1.LoadXml(@"<ns0:root ns0=""http://OrchDebug.DivisionOut""><
Post a Comment
Read more 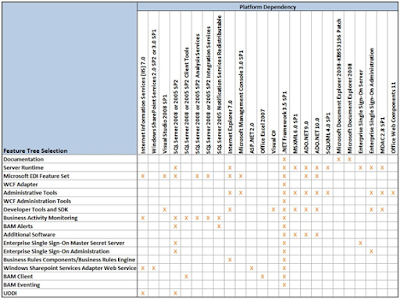 Use this graph to install prerequisites and dependencies for BizTalk Server features.
Post a Comment
Read more

March 09, 2010
While introducing BizTalk Server to clients and students I am always asked about pricing and licensing. It is difficult enough to remember for me all licensing and pricing options. So posting and bookmarking for myself and readers a link which will help to understand licensing with BizTalk Server http://www.microsoft.com/biztalk/en/us/pricing-licensing-faq.aspx The main you should remember and use that: Similar to SQL Server Enterprise, BizTalk Server 2009 ENT can be licensed for unlimited virtualized processors that are available on a single physical server. The customer will be required to license the number of physical processors on a server.
Post a Comment
Read more
More posts